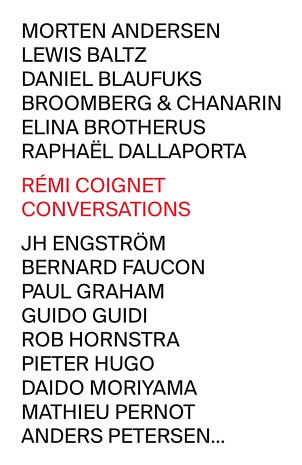 See the Collector Edition
with a print by Bernard Faucon

with a print by Morten Andersen

with a print by Daniel Blaufuks

with a print by JH Engström

with a print by Raphaël Dallaporta

with a print by Pieter Hugo

A geography of contemporary photography

A simple observation sparked these conversations: once you get photographers talking about their work, they all have much to say. Sadly, though, we rarely seem to hear their voice in the media. I was thus deeply tempted to engage those whose work has inspired me.

These interviews are predicated by a choice—to consciously act as a reporter. I try, during thirty to forty-five minutes of conversation, to evoke an entire career. The conversation thus constitutes an artist’s snapshot of his/her practice at a given moment forthright, with no misgivings.

Building a conversation, though, implies having a foundation; otherwise it is little more than an idle chat. Photobooks were an obvious starting point for me, for a variety of reasons. Most notably, books are my chosen field. Moreover, within a body of work, books are like milestones easily accessible and unquestionably real whereas the memory of an exhibition drifts.

Most photographers conceive their work in series. More often than not—at least since William Klein and Robert Frank—the book appears to be their favored means of fixing form, rhythm and sequencing. As it had been said, the book is an independent series of images constituting a work in and of itself. Here, then, is yet another reason to question photographers on these sophisticated assemblies, which are more than just the sum of individual images.

Likewise, the history of photography has been deeply bound to books. The earliest photobook, Photographs of British Algae: Cyanotype Impressions, was published in 1843, barely sixteen years after the first photo, Le Point de vue du Gras, by Niépce. From the second half of the 19th century, the book became one of the primary vectors for circulating photography. This parallel history within the medium progressed calmly, without anyone paying much heed before the 2000s. Today, it seems inconceivable to think of photography without thinking about books.

These conversations intend to share how significant contemporary artists view not only their work, but also the books that form such a key dimension within it. Since the photobook is the common thread, I have included encounters with publishers, graphic designers and curators.

Finally, one of the best reasons for publishing this collection is to highlight the relationships and dialogues (whether direct or indirect) that have flourished among my conversational partners themselves. Some photographers have worked with the same publisher, while others have teamed up with certain graphic designers, and each is influenced by the other…what emerges is a meaningful and evocative geography of contemporary photography.