The Eyes › Books › Regard Fulgurant 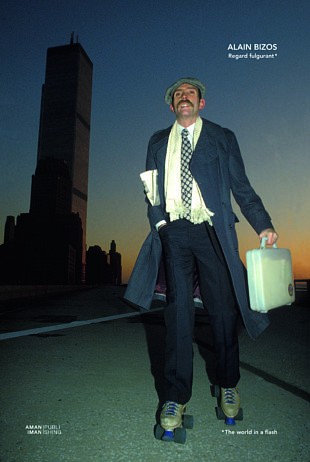 See as well the Collector Edition
20 exemplaires, with a 18×24 cm signed and numbered print.

No monograph has yet been devoted to Alain Bizos. However, at the end of 1970 / beginning of 1980, he developed a personal aesthetic, between art and information, which will mark a turning point in press photography.

In addition to the provocative and sometimes frankly comical side of series like Monsieur Madame produced with the graphic designers’ collective “Bazooka”, we also find in the works of Alain Bizos a deep rethinking about gender, identity or time.

“[Photography] will be a means for him to pursue research
which are more in the field of a contemporary art that knows Warhol as well as the minimalists, neon users as well as underground cinema. »
Quote from Christian Caujolle’s preface.

Founding member of Libération in 1973, instigator with the group “Bazooka” of the magazine Un regard mo- derne, Alain Bizos is very present in the press of the time, we remember in particular his portraits of Jacques Mesrine, public enemy n°1, which appeared in Paris Match in 1979. It is especially with the magazine Actuel, a trendy monthly magazine relaunched in 1979, in which he had carte blanche, that he strongly printed his mar- that. Defining himself as an “artist reporter photographer”, he creates the images, writes the texts and lays out his subjects, from the testimony of the violence of the world to the underground culture of a Nina Hagen.